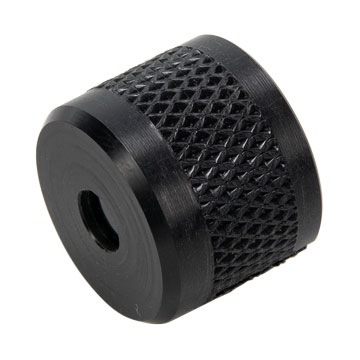 Description
The LC/EF Polarizing Attachment was developed to control the size of the laser dot, making viewing easier and more accurate on a variety of surfaces.

This is accomplished by the addition of a linear polarizer element to effectively control the intensity of the laser beam.

A lower intensity beam is easier for the human visual system to resolve, especially on reflective surfaces.

The polarizer simply slips over the nose of the LC/EF. Rotating the attachment varies the intensity of the light striking the target surface.

Adjusting the intensity will make the dot appear smaller by reducing the "halo" effect that is produced as the beam is scattered by the target surface and the diffraction pattern caused by passing a beam of light through a small opening.

Here is another way to look at it. When the laser is reflected from the target surface there is a primary "hot spot" at the center of the beam surrounded by a secondary ring of reduced intensity. By polarizing the beam we can begin to eliminate the secondary ring, making the primary hot spot easier to see.

The polarizing attachment is still a great addition to Laser Edge and Center Finders that don't have one.
Photos
Compatibility

This product works with these LittleMachineShop.com products: